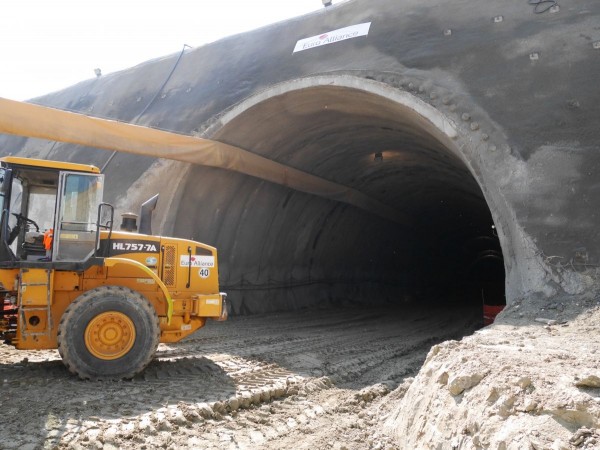 Euro Alliance Tunnels commences the construction of a new road tunnel – a part of the third stage of the construction of the Gabrovo Road Bypass. The facility is situated from km 12+420 to km 12+960 of road III-5004, in the area of the “Chehlevtsi“ district.
The tunnel length is 540 m. It consists of a single tube with a cross section of approximately 80 m², two traffic lanes of 3,75 m, two 0,5 m berms and 0,75 m sidewalks.
The facility will be constructed according to the New Austrian Tunnelling Method, as – according to the geological report – most of the construction is expected to take place by explosive works.
„Euro Alliance Tunnels has constructed over 120 km of tunnels not only in Bulgaria, but also in other European countries”, said Krum Trashliev, the Chief Executive Officer of the company. “The guarantee to an individual engineering approach in each project is based on our specialisation throughout the years and the implemented international practices in the field“, he added.
All the activities for the design and reinforcement, including the outer (secondary) lining of the tunnel, will be completed within 250 days. In order to achieve that, the work will be performed in parallel from both sides of the tunnel.
The Gabrovo Road Bypass is a part of Trans-European Transport Corridor No. ІХ – Bucharest – Ruse – Dimitrovgrad – Alexandroupolis. It is used to cross Stara Planina Mountain in the central part of Bulgaria. The main transport directions, served by this facility are: Ruse – Veliko Tarnovo – Shipka – Stara Zagora – Svilengrad (Makaza) and Oryahovo – Sevlievo – Shipka – Stara Zagora – Svilengrad (Makaza).
The project is co-financed by the EU Cohesion Fund and the Bulgarian national budget, through the Operational Programme on Transport 2007-2013. The contractor for the entire project is the PSVT Consortium, formed by "Hidrostroy" AD, "Patni Stroezhi – Veliko Tarnovo" AD, "Patinzheneringstroy – T" EAD, as well as “Euro Alliance Tunnels“ as the sub-contractor, in charge of the construction of the tunnel section of the project.